Following last night’s AGM, I thought it would be a good time to give you all a run-down of our plans for the next season.  Let’s start at the top:

Tony Rowbottom has succeeded Mark Goodson as President for the coming season. Tony has been a life-long member of Driffield RUFC, apparently making a couple of 1st team appearances back in the day. He was the Mini/Junior Chairman for 5 years through the early 2000s.  I am sure Tony will enjoy his year as Mr Pres, and wish him all the best.

Below: Mark Goodson hands over the presidency to Tony Rowbottom. 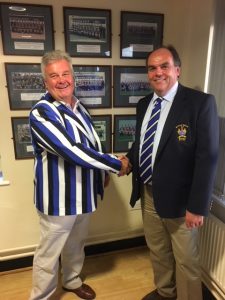 Richard Dee takes the role of Senior Vice President : what a couple of years we’ll have with these two in charge…

1st XV will once again be playing in North One East.  Again, on paper, the league looks very strong. Morley and Pocklington come down from the league above, whilst York, Consett and Scarborough all join after promotion. The league has only 3 teams outside of Yorkshire, with 5 so-called “derby’s” against Bridlington, Malton, Scarborough, York and Pocklington.  The lads start their season with 3 warm-up games : on 11 August we host Lymm, 18 August we host Westoe and 15 August we travel to Middlesbrough.  The league starts on Saturday, 1 September when we welcome York.

Coaches : A few changes in the coaching set up have taken place over the summer:

The season will see a Colts side for the first time in a few years. This team will be made up of players from 16/17/18 ages and will be run by Dom Thompson and Jez Harrison.

The Ladies Team still go from strength to strength. Following their unbeaten second half of the season, they have entered a league for this season. They will play against York, West Leeds 2nds, Ionians, Scarborough and Morpeth to name a few.

Hopefully with all the local derbies we will be able to arrange some curtain-raisers for either the colts or ladies.

Overall, a good off-season, and with a blink-of-an-eye it will be 11th August and the 2018/19 season will have started.

Thanks to everyone and good luck.