The off-season has come and gone and, on Saturday, we kick off our 2019 / 20 season with our 1st warm up at Goole RUFC (KO 2PM TBC). We are taking two teams, so there will be 2 games, each game being made up of 2 x 30 minute periods. Goole are running their family day on this date and so it would be great if we could support them.

This will be followed by our final warm up against Doncaster Phoenix (1st Team, 2nd Team & Ladies all having games) Sat 31st August.  We are holding our own family fun day on this date, with bar / food and music throughout the day and evening. Again we would appreciate your support for this event.

Stuart Cooper is once again in charge as Director of Rugby, with Kyle Dench returning for another season as Head Coach and Mitch Williams adding his knowledge with the forwards.

The lads have been working in the gym and at pre-season training since the 1st week in June. Dench told me : “We gave the lads May off to have a bit of a break, but since the 1st week of June we have been training twice a week, plus making sure guys have been putting their own hard work in at the gym. We started ‘trainer of the month’ this year : the idea is that the guys who give the most during this prep time should be rewarded.  It is awarded to the player who has been at training and the gym the most over the month. The winner receives a free pizza and drink at Berts Pizzeria, Brandesburton. We have had around 70 lads down at training so far.  It has been great to see the young colts coming down and getting involved in the squad training. We have some great lads coming through for the future. Hopefully everyone will get a run out over the next couple of weeks at Goole & Beverley before we get to the Doncaster game, when we will be aiming to play a 1st XV squad & 2nd XV squad. We are all really excited for the opportunitys this season will give us.”

We have managed to keep the majority of last year’s squad : the only negative for us is the loss of George Mewburn.  George has decided to have a crack at National 1, joining Hull Ionians. Of course we wish George the best of luck for the season.

On the positive side, we welcome back Ben Blacker and Henry Furbank : both have finished university and have decided to move back to Driffield and will be great additions to the squad. Harrison Dodds and Will Brigham are all hoping to have strong seasons after missing the last 18 months with injuries. Simon Pettinger is working hard to get back to full fitness : unfortunately he picked up a knock in training a couple of weeks ago which will mean he might miss the beginning of the season. Welcome back to all the above. We will also be welcoming Ryan Longville : he is joining us for the season from Southern Districts, as we continue to grow our relationship with the Sydney-based club. With a couple more signings yet to announce.

Ben Lawrence returns after breaking his leg last year, however, this is as 1st team physio as he still recovers from his injury. Sam Havler continues in his role as out-of-match physio.

North One East has some new additions this season. Durham City and West Hartlepool come back in following promotion from D&N1. Durham won the league, and West beat Heath in the play-off. Moortown join us for the 1st time following their league-winning season in Yorkshire 1.

Coming down (and across) we have Kendal RUFC : they finished 3rd from bottom in North Premier last season, but due to North One east having one team short, they were asked to move across. Kendal have ex-Driffield player John Dervey in their squad : an interesting side line should he play in the games against us.

We have 4 games on our doorstep : Malton, Pocklington, Scarborough and York. Unfortunately Bridlington got relegated, but I believe there will be a Turnbull Trophy at some point in the season. Then the usual West Yorkshire trips : Morley, Bradford & Bingley, Cleckheaton, Huddersfield YMCA and Moortown. 3 trips up north to face West Hartlepool, Durham City and Percy Park. Some tough matches ahead without doubt.

Our league season starts at Driffield on the 7th September when we welcome York RUFC.  We have also entered the Yorkshire Shield : the Yorkshire committee have decided to change the format for this year’s competition.  We are in the Yorkshire Shield, along with other teams from North One East and some of Yorkshire One. We have been drawn against Bradford & Bingley (A) : this will take place on or before 2nd November.

We have had a few movements on the committee as well during the summer. Andrew Chapman has stepped down as Chairman. Chappy has been a great chairman over the past 9 years, keeping the club grounded, but also successful on and off the pitch. Many thanks to him. He is passing the job onto Dominic Thompson : Dom has been Vice Chairman for the past two season, and is looking forward to his new role, and can’t wait to get the season started. Chappy remains as Vice Chairman.

Richard Dee is our President for the coming season, taking over from Tony Rowbottom. 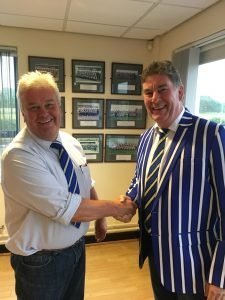 Tony had a great season last year, enjoying most of the 1st XV games, but also getting around the other teams and enjoying his Sunday’s with the mini juniors. Dave Dinsdale is senior VP for this season.

The 2nd XV start their season with the warm-up game against Doncaster Phoenix on 31st August. followed by their 1st league game on the 7th September at York RUFC.

The 3rds start on 5th October, with a league match at Hornsea RUFC.

The 4ths also start on 5th October, welcoming Pocklington in their league.

Our ladies have continued their growth and this year join the National Challenge 2 League. This sees them playing Lincoln, Hull Ionians, Kesteven, Boston, York RI, Doncaster, Sleaford and Scunthorpe. Their league starts on 8th September when they welcome Lincoln Ladies. The ladies are also competing in the Yorkshire Cup, with the 1st round being played on the 29th September. Lucy Grantham has been made captain for this season.

As usual, our pre-match dinners have been selling very quickly.  We currently have spaces for the following games only : 07/09 v York, 26/10 v Cleckheaton, 16/11 v Percy Park and 04/01 v Durham City – all others are sold out. We are holding our Ladies Day on 21st September during the match against Kendal : this is already sold out. We also have a joint venture with James Mackenzie from the Pipe and Glass at South Dalton. James is going to be cooking the pre-match lunch for our guests on the 28th September with proceeds being shared with the club and our chosen charity for the season. We currently have 3 tables still available for this event. For more information please contact Ben Medhurst or James Farnsworth.

The club’s primary focus is providing a safe and fun environment to play rugby.  Obviously the 1st team take center stage on most weekends, however, we are very proud that we can put out 4 men’s teams on a Saturday afternoon, followed by mini / junior teams at every age group on a Sunday morning and our ladies playing on a Sunday afternoon. This all takes a lot of organizing : to organise things we need volunteers to help with car parking on a Saturday and Sunday, to write match reports and take photos for the teams, and to help behind the bar and in the kitchen. If you would be able to spend a couple of hours volunteering over a weekend please get in touch with club : it would be really appreciated.

That’s all for now. Don’t forget, we will be posting a preview to all our League and Cup games on here throughout the season. Live scores can be received via our twitter account on most weekends @driffrugby. Keep a look out for social events through out the season : again, we really need these to be supported – it makes the club stronger.

Good luck to everyone involved this season, especially those pulling on the Blue, Black and White.